The Universal Orlando Resort currently resides, for the most part on the east side of the intersection of Interstate 4 and Kirkman Road.

I say for the most part, because the two Endless Summer Resort Hotels are located on the other side of I-4.

And I say currently, because Universal has purchased a large plot of land 2 miles to the south east on which they are developing new guest areas. There are lots of existing businesses between this new location and the rest of Universal’s property.

When I speak of big picture locations on Universal Orlando Resort property, I often refer to the Main Campus.This I define as the area west of I-4, which is interconnected by Universal’s Water Taxi Service or the locations that you can walk to without having to cross city streets using cross walks or bridges.

In the image below, which is facing west, you can see the Main Campus (the big red outline). I-4 is the major highway running diagonally bottom-right to middle-left. The outline to the left of the Main Campus is the Cabana Bay Beach Resort and Volcano Bay, both of which are separated from the Main Campus by an Orlando city street and are not connected by the waterway. The other red outline on the other side of I-4 is the two Endless Summer Resorts.

The entire Universal Orlando Resort area west of I-4 (which contains 2 theme parks,1 water park 7 resorts, an entertainment area and parking) is a relatively small, compact area. This makes getting around quite easy, whether by Water Taxi, Bus, or walking.

The Universal Orlando area west of I-4 is about the size of Walt Disney World’s Epcot plus it’s parking lot (a little bigger) or the size of the Magic Kingdom and Bay Lake.

Below is a picture of the current Universal area showing it’s layout with all features labeled.

As mentioned, Universal has purchased more land in order to create new guest areas, which will be accessible via Bus.

The new area is shown below to the south-east of the existing areas. 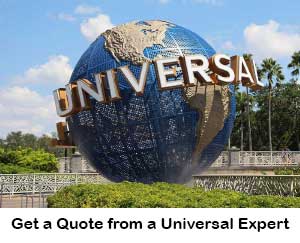 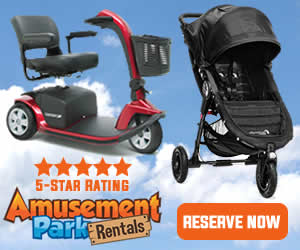